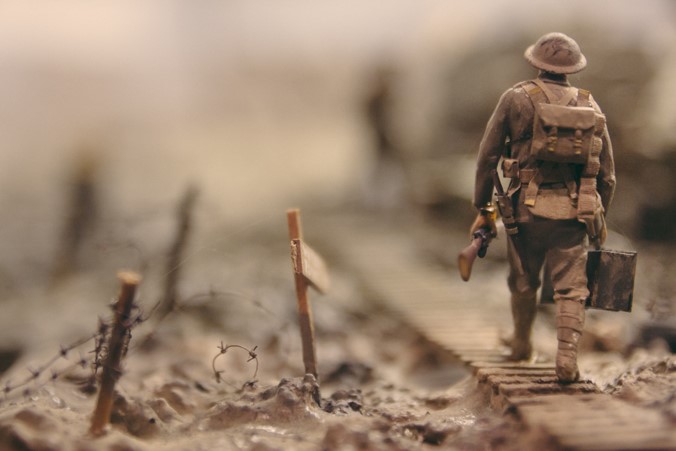 2 Timothy 2:8-14
Paul pens this passage in prison proclaiming the power of the gospel presented through a power-filled soldier. Paul uses his military history and current interaction with the guards around him to write of the characteristics of a good soldier of Jesus Christ. This idea starts in verse 3 where Paul explains the hardships of a soldier and his purpose which is to please the Lord is seen in verse 4. Verses 8-9 show us that through the soldier's purpose he can also find his proclamation. This motto as seen in the first part of verse 8 is to "Remember Jesus Christ". This is not a state of bringing back to one's mind Christ but more of a war cry that "Jesus is the Captain of our salvation!" A soldier would not enter into a battle if he knew he was going to lose but on the contrary, a soldier may charge into war if he knew the victory was his. Is this not so for the Christian Soldier? Warren Wiersbe explains, "What an encouragement Jesus Christ is to a suffering Christian soldier! For He died and rose again, proving that suffering leads to glory and that seeming defeat leads to victory." God wants us to be soldiers who glorify Him through hardships and magnify His name as we seek to share the gospel with others. Paul knew his purpose and ended up suffering for the sake of the gospel just as Jesus did. He knew that if he only sought for his own safety many others would forgo knowing the saving grace that Jesus provided for them. Knowing that he was going to suffer, Paul still chose to preach the gospel even in prison. This is done not in Paul's power but in the power of God as Paul trusted in God's plan. As 1 John 5:4 says it is faith in Jesus Christ that gives us victory. We have victory through our identification with Christ in death, burial, and resurrection.

Victory. You are either going into a battle, through a battle or coming out of a battle of some kind, but you're not going through it alone. Many times we pray that God takes away our battle but we forget that the battle is for us. Why do we go through battles?
Faith. If we don't trust the commanding officer we either create more work for ourselves or jeopardized the whole army. What does this really look like? We do not put faith in our faith or in our feelings because they will change and fail. We put our faith in Christ.
The great missionary, J. Hudson Taylor, often said, "It is not by trying to be faithful, but in looking to the Faithful One, that we win the victory."​

Photo by Stijn Swinnen on Unsplash